With the module "Profiling", the user can retrieve information based on the identity of the chemical or its structure.

The Toolbox currently contains a large list of profiling methods (profilers) that identify the affiliation to previously defined categories, taking or not taking into account observed or predicted metabolites.

For most of the profilers detailed explanation is available.

Profiling methods (profilers) identify the affiliation to previously defined categories (e.g. the categories defined by the US-EPA for the assessment of new chemicals or the categories assessed within the OECD HPV Chemicals Program), mechanisms or modes of action. The outcome of the profiling also determines the most appropriate way to search for analogues.

Profiling methods are separated into five groups based on the type of the qualitative information used for chemical assessment:

Predefined categories are set of rules for grouping chemicals developed by recognized institutions or organizations and they could be considered as “standard” categorization schemes.

The following predefined categorization schemes are implemented in the Toolbox:

Mechanistic categorization schemes consist of rules for identification of important chemical characteristics based on published knowledge. Practically they rely on certain hypothesis about the studied phenomenon. In this respect their application is oriented for the phenomena for which they were developed.

The following general mechanistic categorization schemes are implemented in the Toolbox:

The following endpoint specific categorization schemes are implemented in the Toolbox:

The following empiric categorization schemes are implemented in the Toolbox:

A repeated dose profiler used to identify the toxicological profiler of chemicals. The profiler contains boundaries based on repeated dose toxicity test data extracted from database of Hazard Evaluation Support System (HESS). The profiler is developed by NITE, METI (Japan) in cooperation with LMC

Practically, these are the profiling schemes created by the user. In any case, while creating a new profiler the user may choose to place it in any of the above sections.

The Toolbox is able to provide two types of metabolites, generated via:

All metabolites, documented and simulated, are searchable and profiled by the same approach as target chemical is thus informing the user about the potential formation of toxic metabolites of the target chemicals. Additional information concerning the studied species and experimental conditions is also provided by the databases.

Three databases of collected 400 observed metabolic pathways in microorganisms and mammals are implemented in the Toolbox.

Metabolic pathways documented for 100 chemicals with 630 studies in different mammals are stored in a database format that allows easy computer access to metabolic information. The collection includes chemicals with variety of functionalities, aliphatic amines, alkyl and aryl halides, ethers, esters, carbamates, carboxylic acid esters and multifunctional compounds. In vivo and in vitro studies were used to analyze the metabolic fate of chemicals. Metabolic maps with the in vivo studies are predominantly for the collection of studies (347 studies included in 49 maps). Microsomes prevail over the other experimental systems included in the in vitro studies (around 50% of studies). Around 50% of administration routes included the in vivo studies refer to oral route of administration. Different sources including monographs, scientific articles and public web sites were used to compile the database.

Metabolic pathways documented for 447 chemicals in different mammals are stored in a database format that allows easy computer access to metabolic information. The collection includes chemicals with variety of functionalities, aliphatic hydrocarbons, alicyclic rings, furans, halogenated hydrocarbons, aromatic hydrocarbons and haloaromatics, amines, nitro-derivatives, and multifunctional compounds. In vivo and in vitro (predominantly microsomes) studies were used to analyze the metabolic fate of chemicals. Different sources including monographs, scientific articles and public web sites were used to compile the database.

Simulators of molecular transformations imitating microbial, liver and skin metabolism, as well as abiotic hydroxylation are also implemented in the system. Below a short explanation for each of the simulators is presented:

Autoxidation (AU) is a spontaneous, air-induced oxidation of organic molecules. It is a free- radical chain reaction of a chemical with molecular oxygen, resulting in the formation of oxidation products. Among the latter, organic hydroperoxides are regarded as the most important with respect to eliciting adverse effects such as contact allergy. An AU model was therefore developed to simulate the observed AU pathways. To this purpose, a training set of 133 chemicals (terpenes, simple aliphatic and polyethyleneglycol ethers, aldehydes, aminophenols) with published data relative to AU pathways. Data consistency was maintained by collecting data within the following test conditions: air or oxygen exposure, room temperature, atmospheric pressure, AU in bulk or in the presence of different solvents, nearly neutral (pH 7 - 7,5) or slightly alkaline (pH 8 - 9), medium, duration of AU from a few hours to several months.

The original CATABOL simulator of microbial metabolism is implemented in the system (J. Jaworska, S. Dimitrov, N. Nikolova, O. Mekenyan. SAR QSAR Environ. Res., 13, 307 (2002); S. Dimitrov, R Breton, D. Mackdonald, J. Walker, O. Mekenyan. SAR QSAR Environ. Res., 13, 445 (2002); S. Dimitrov, V. Kamenska, J.D. Walker, W. Windle, R. Purdy, M. Lewis, O. Mekenyan. SAR QSAR Environ. Res., 15, 69 (2004).). Single pathway catabolism is simulated using the abiotic and enzyme-mediated reactions via the hierarchically ordered principal molecular transformations extracted from documented metabolic pathway database. The hierarchy of the transformations is used to control the propagation of the catabolic maps of the chemicals. The simulation starts with the search for match between the parent molecule and the source fragment associated with the transformation having the highest hierarchy. If the match is not found search is performed with the next transformation, etc. When the match is identified, the transformation products are generated. The procedure is repeated for the newly-formed products. Predictability (probability that the metabolite is observed, given that the metabolite is predicted) evaluated on the bases of documented catabolism for 200 chemicals stored in the database of "Observed microbial catabolism" is 83%.

There are three types profiling methods based on their structure:

To see an explanation of the categories from a profiling scheme, the user needs to select the scheme (1) and then to click on the button View (2). This will run the Profiling Scheme Browser (3). Initially, the Profiling Scheme Browser starts in Basic Mode. In this mode it will display references for each category definition from the profiler. Clicking on the button Advanced (4) will switch to Advanced Mode. (Figure 1) 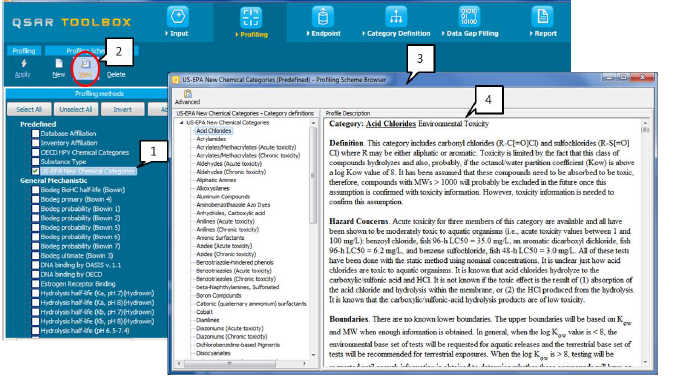 In advanced mode the editor shows the query tree (1) and the content of the selected boundary and lets the user manipulate them. (Figure 2) New categories can be defined, existing ones can be renamed or deleted, rules can be added or deleted, new boundaries can be set. Changes for the profilers that are delivered via the Toolbox installation cannot be saved. 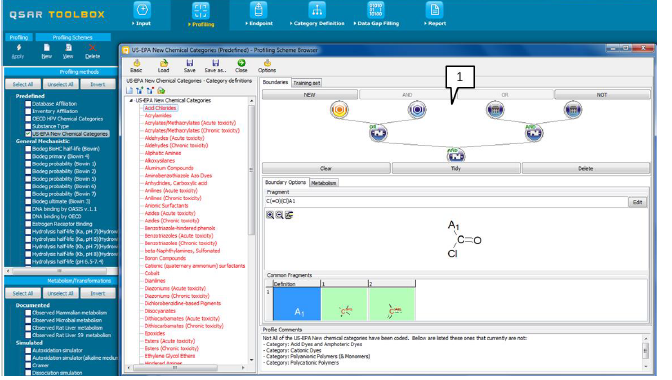 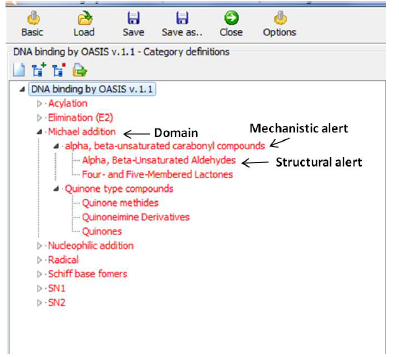 The visualization of dendroidal type scheme is illustrated on Figure 4. 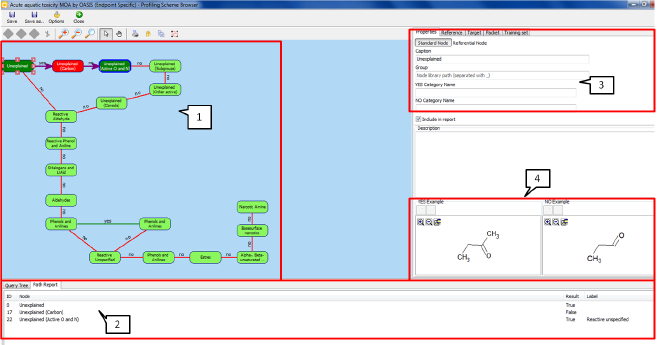 1 – logic panel: here a logic of the profiling scheme organized as a of logical nodes is presented

2- a panel with path report is given in panel 2.

3 – a panel with properties of nodes

4 – a panel with example structures that meets (does not meets) the criteria of the logical nodes is presented here.

Different organization of profiling results displayed on data matrix is available based on the three types profiling methods: 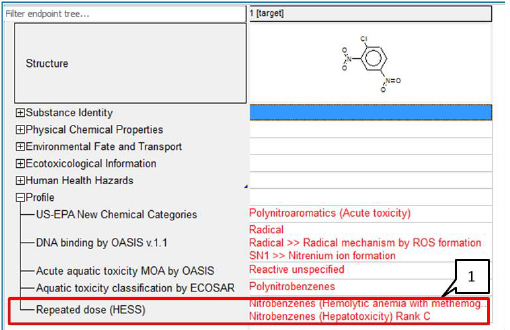 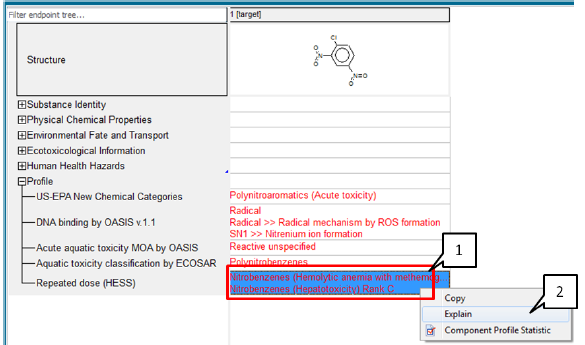 Then the user has to select one of the available profiling results (1) and to click Details button (2). (Figure 7) 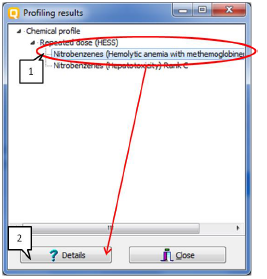 As a result of this action a window displaying the boundaries and mechanistic justification of the profiling method appears (1). (Figure 8) 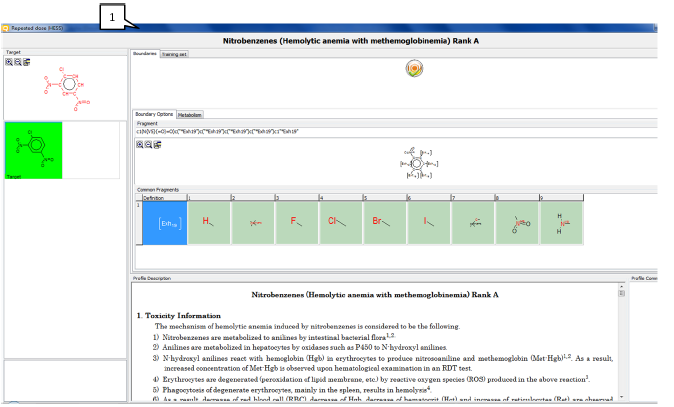 Fields of the profiling results window are explained below (Figure 9): 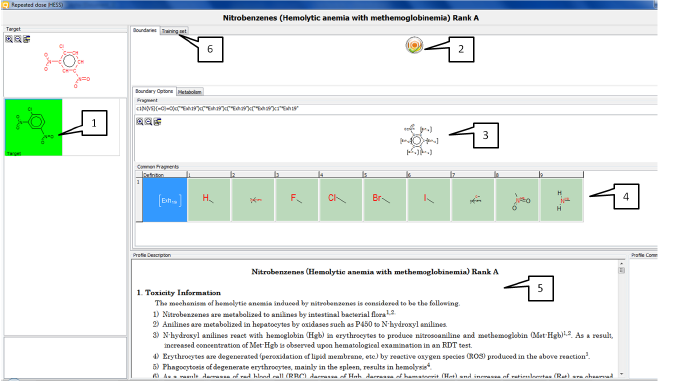 1 – Panel with target chemical, if the target meets the criteria of the displayed category, then the target is highlighted in green.

2 – Structural boundary of the displayed category. If the target meets the criteria of the boundaries then it is marked with green tick.

5 – Mechanistic justification associated to each of the displayed category

Based on this hierarchical type organization, the profiling results from obtained from these types scheme is illustrated on Figure 11: 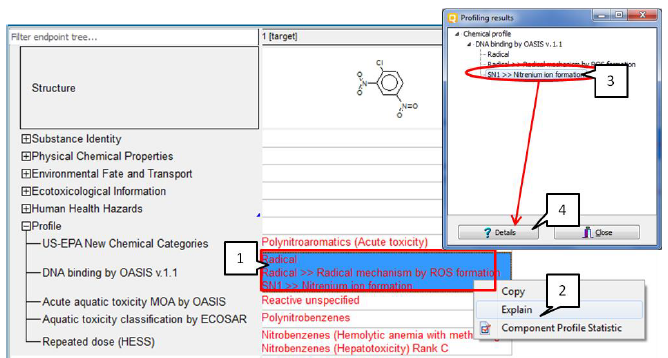 A V. Creating a custom profile

In addition to the pre-installed categorization schemes, the user can create new profilers, implementing their own logic.

To do this, the user must click on the button New Scheme (1). This will bring up a dialog, which requires entering a name for the new categorization scheme. After entering the name, the system will create a new empty scheme and will load it in the Profiling Scheme Browser (2). (Figure 13) 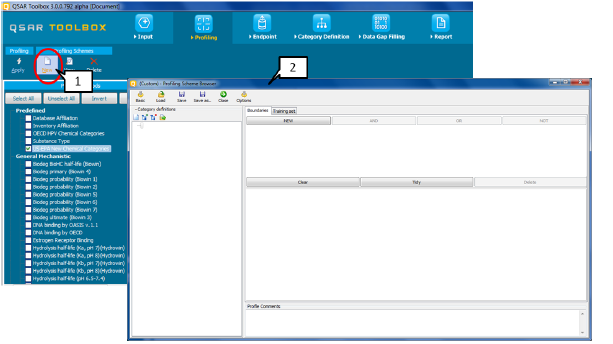 To add a new category the user must click on the button Add Category (1). After entering its name (2), the new category is created. Next, the user has to add its boundaries. (Figure 14) 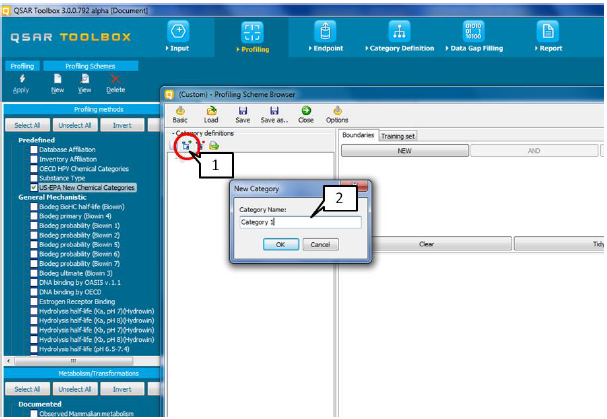 2. Adding boundaries to a category

To add boundaries, the user must click on the button NEW (1). A list will appear (2) representing the five types of boundaries that describe a category:

Depending on the type of category selected, the user will be provided with different options to set the boundaries. For example for parametric boundaries limit values (minimum, maximum or both) are required, for structural boundaries structural fragment(s) are required. (Figure 15) 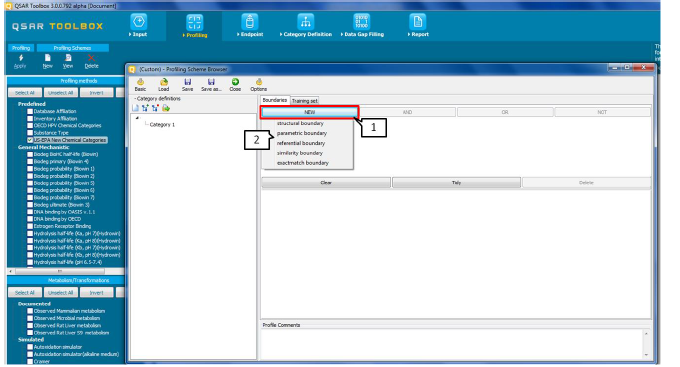 In order to combine logically two or more boundaries, the user must create a query that describes the logic of the category scheme. Each set of boundaries is presented by a query clause (1). Query clauses could be inverted by using the button NOT (2). Additionally, the original clauses or the clauses that are derived from them, could be combined using logical buttons AND (3) or OR (4).

The picture below is presents a category containing two boundary sets - one parametric and one structural. Additionally these boundaries are combined in a way, which defines the following criteria: 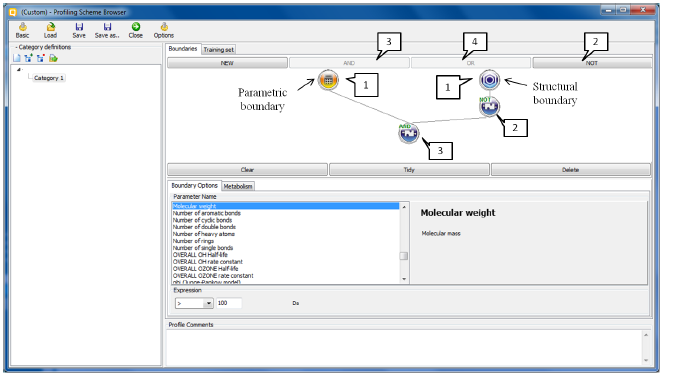 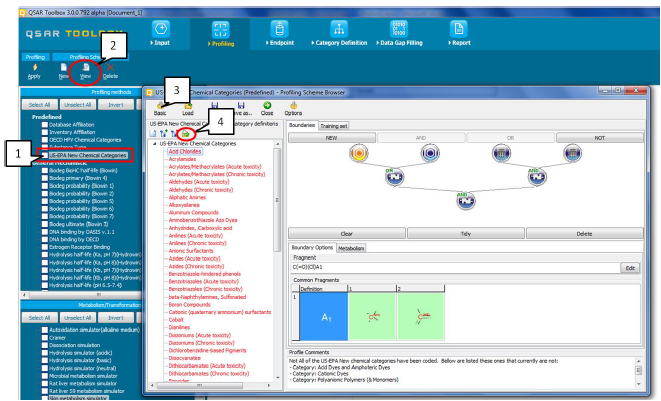 After this operation a window named Report Preview Form appears (1). The user could save the scheme in one of the following formats: PDF, HTML and RTF. The user has to click one of the displayed formats (2). (Figure 18) 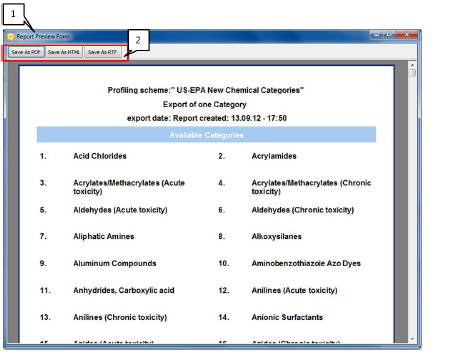 The user is allowed to delete a custom profiler ONLY. The available profiling scheme, observed databases and simulators are not available for deletion.

To delete custom profiling scheme, please select the scheme that will be deleted (1), then click Delete scheme button (2). (Figure 20) 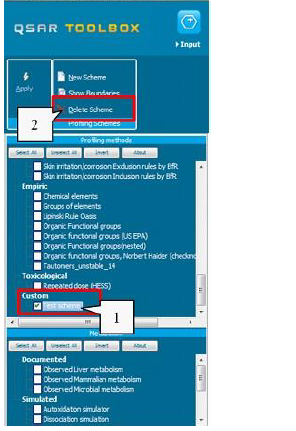